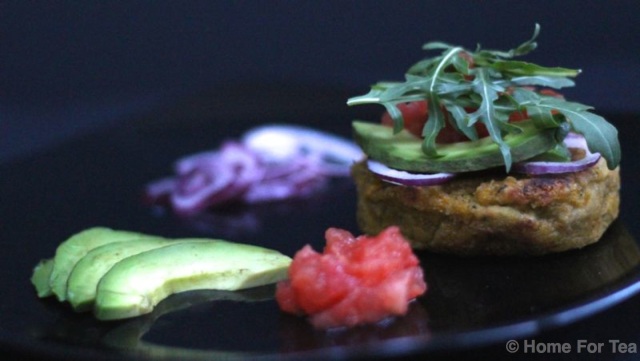 These burgers are a revelation – delicious, healthy, good for you, low in fat,  quick and easy to make. They also keep you feeling fuller for longer because chickpeas are full of protein and fibre and as if that wasn’t enough they also contain exceptional levels of iron, vitamin B-6 and magnesium. The burgers take only minutes to make so they are the ultimate healthy ‘fast food’.  Now as a rule, I don’t make New Year resolutions (because I find that January is hard enough to get through anyway without making it harder) however one thing I want to do this year is eat less meat and have one meat-free day each week, mainly for health reasons. Then I came across this article  “The planet’s dangerous appetite for meat” which highlights the importance of reducing the amount of meat we eat, particularly beef, in order to reduce the huge amounts of methane produced by the animals which in turn results in potent greenhouse gas emissions. So eating more vegetables is not just about taking care of our health it is also about doing our bit for the climate and the environment.

This particular recipe came about as a result of a suggestion from one of my friends, Liz in my weekly Spanish class. Liz is a vegan and suggested I post a vegan recipe in January to coincide with the Veganuary campaign which tries to encourage people to go vegan during the month of January.

So if you are a regular carnivore like me please give this recipe a try. I guarantee, you will be pleasantly surprised plus your body and the planet will thank you. The recipe is adapted from a recipe of Jamie Olivers’.

*When using raw red onion, in order to reduce its harshness and aftertaste I like to slice it and then put the slices in some boiling water for about 5 mins, then dry in some kitchen paper.

This site uses Akismet to reduce spam. Learn how your comment data is processed.

The Fairy Kitchen
Cooking Without Limits

Information and Products for the Ketosis Diet

Simply Made Kitchen and Crafts